Architecture of the walled city of Carcassonne

One hingering in the lists of the city (space between 2 walls of fortification), one can easily realize that the city had "suffered" from sudden consecutive final improvements in its construction. This is explained by the fact that in the Middle Age, the priority for all the people was to conqueer new places. Carcassonne, like many other cities, was the gate opened to invasions. Its geographical location made a strategic place of it.

The Gallo-Roman influence is definitely visible. The first stoned walls of Carcassonne date back from this period. They are easily recognizable and respect the rules common to all the Roman fortifications.

The Francs brought in the Germanic tradition in which wood was very much used. One can imagine a wood palisade as a defense of the enceinte, but no trace make it possible to confirm such explanation.

The defensive system of the Roman fortification didn't changes a lot. The siege of the fortified towers lasted several days, attackers often gave up, plundering the surrounding countryside. Defenders resisted until victory. Little by little, the means of attacks started to improve and the first machines of wars appeared. Until the XIIth century, the cities were only defended by enceintes flanked by towers.

End of XIth to XIIIth century:

Important construction works were undertaken on several points of which the "Count's Castle". Walking in the inner enclosure, one can easily recognize parts of the masonries dating back to this period. Their caracteristics are as fallow : 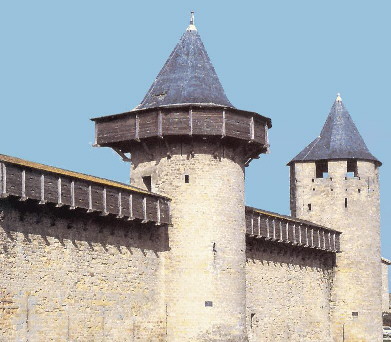 Saint-Louis was attaching a great importance to Carcassonne, which was covering a large place of the domain, situated above all, in front of the Aragon.Saint Louis decided to make an untakable fortress of it, as he was claiming not to fear the possible consequences of a siege which would have put it in the hands of a dynamic ennemy.

Saint Louis started new construction works. The Barbican of the Castle (of which nothing remains today) and the outer wall of the city, except the approaching ramp.

One can recognize, from this period the use of stones with embossing.